XRP price shows bears in control of the trend. Still, high-cap investors seem almost certain of a countertrend spike in the coming weeks. This thesis remains neutral but identifies how to engage in a bearish and bullish scenario.

XRP price is subdued as the bears have revolted against the bullish countertrend rally established earlier in the month. On December 22, the digital remittance token is at a 16% loss of market value on the month. Ripple now stands 3% above a vital area of support. A second attempt at the weekly low of $0.332 could catalyze a stronger decline.

XRP price currently auctions at $0.34. Despite the drawdown, high-cap investors seem persistently engaged with the digital remittance token and may even consider the declining price as a discounted offer. FXStreet’s Crypto Analyst John Isige was the first to report a significant uptick in the accumulation of XRP tokens by Investors with 1,000,000 to 10,000,000 XRP.

According to the analysis, “1617 addresses have purchased 7.23% of Ripple’s entire network supply,” the largest XRP tokens ever held to date by the group of whale investors. 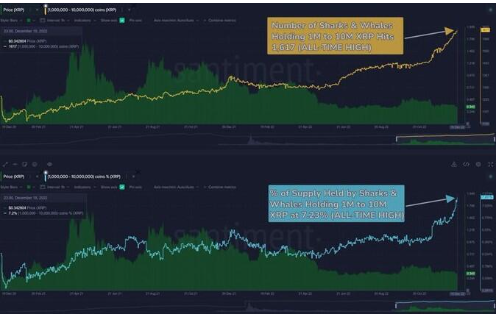 Still, the technicals have yet to align with the whales’ intention as the smaller time frames seem suppressed by a bearish stronghold near the $0.35 barrier. The XRP price will need to hurdle and consolidate above the aforementioned level to begin aiming for higher target zones. The broken support level at $0.044 has yet to be retested after being pierced during the first week of November. A retest at the barrier would result in a 30% rise from Ripple’s current market value.

On the contrary, the earliest evidence that the high-cap investors are on the wrong side of the trade would be a breach below this week’s low at $0.332. The bearish target zone would be the 2022 low at $0.287. The XRP price would decline by a minimum of 15% if the bears are successful.