Charles Hoskinson, an American entrepreneur and co-founder of blockchain engineering company Input Output Global, urged the Cardano community to share their take on the new improvement proposal. Similar to Ethereum Improvement Proposals, ETH’s competitor Cardano is gearing up for the launch of Cardano Improvement Proposal 1694 that paves way for the Voltaire phase of ADA’s development.

The Voltaire phase is key to Cardano becoming a self-sustaining system as it introduces voting and treasury in the smart contract network. Network participants will control the future of Cardano, and ADA will become truly decentralized with no need for IOG’s management to make decisions.

The developmental journey has the potential to trigger a bullish breakout in the Ethereum-killer’s price as utility and adoption of the altcoin is set to rise.

Charles Hoskinson, who co-founded the world’s largest smart contract network Ethereum and then co-founded Cardano, has called the community to share their feedback on Cardano’s Improvement Proposal. CIP 1694 is a proposal that lays the foundation for community governance and self sustainability of the Cardano ecosystem.

Jared Corduan, Software Engineering Lead at Input Output Global, shared details of CIP 1694 on Github, describing it as a mechanism for on-chain governance that will underpin the Voltaire phase of Cardano. Corduan shared a document that builds on and extends the original Cardano governance scheme that was based on a fixed number of governance keys.

CIP 1694’s purpose is to provide a first step that is both valuable and technically achievable in the near term as part of the proposed Voltaire governance system. It is a jumping-off point for community input and subsequent proposals may adapt and extend it to meet emerging governance needs. 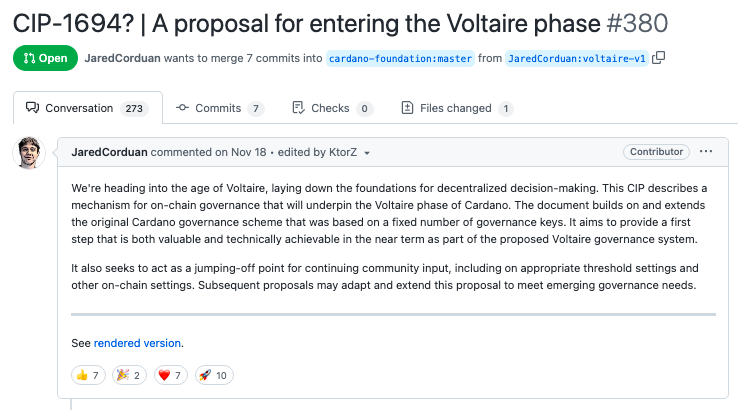 Charles Hoskinson took to Twitter to address the community of the smart contract platform and encouraged participation.

Glad to see the community going through this. I’d encourage everyone in cardano to do readings of the CIP and share your opinions both pro and con https://t.co/rvJ8eXTld1

Cardano’s development team and developers in the ADA ecosystem have prepared to usher in several key features in 2023, including the launch of the Voltaire phase, Hydra and the launch of stablecoin Djed.

While the Voltaire phase is key to the project’s decentralization and community governance, Hydra is a layer-2 scaling solution that reduces confirmation times and increases transactions per second on Cardano’s blockchain.

Djed is the ADA developer’s attempt to create a stable digital asset backed by the native currency of the network. Users who send their ADA tokens to the given smart contract address will receive the US Dollar equivalent of the stablecoin in return. Likewise, returning Djed to the same address will over the USD equivalent worth of Cardano to the user.

While there are critiques of this stablecoin model that believe a major downside volatility in Cardano could result in collapse of Djed, Hoskinson’s team has plans to introduce a reserve currency that dampens the price volatility to an extent.

These updates are lined up for 2023, making it an eventful year for ADA ecosystem users and token holders. The successful launch of the stablecoin and on-chain voting and treasury governance on the Ethereum-killer smart contract network could fuel a bullish sentiment among ADA token holders.

Cardano price is currently in a descending channel and ADA has traded within this channel for over a month. The collapse of the FTX exchange and bankruptcies from the spreading contagion doubled down on the crypto bear market, increasing selling pressure on altcoins like ADA.

To escape from this bearish dominance, ADA needs to close above the descending channel’s upper trendline to confirm a bullish breakout and a possible trend reversal. 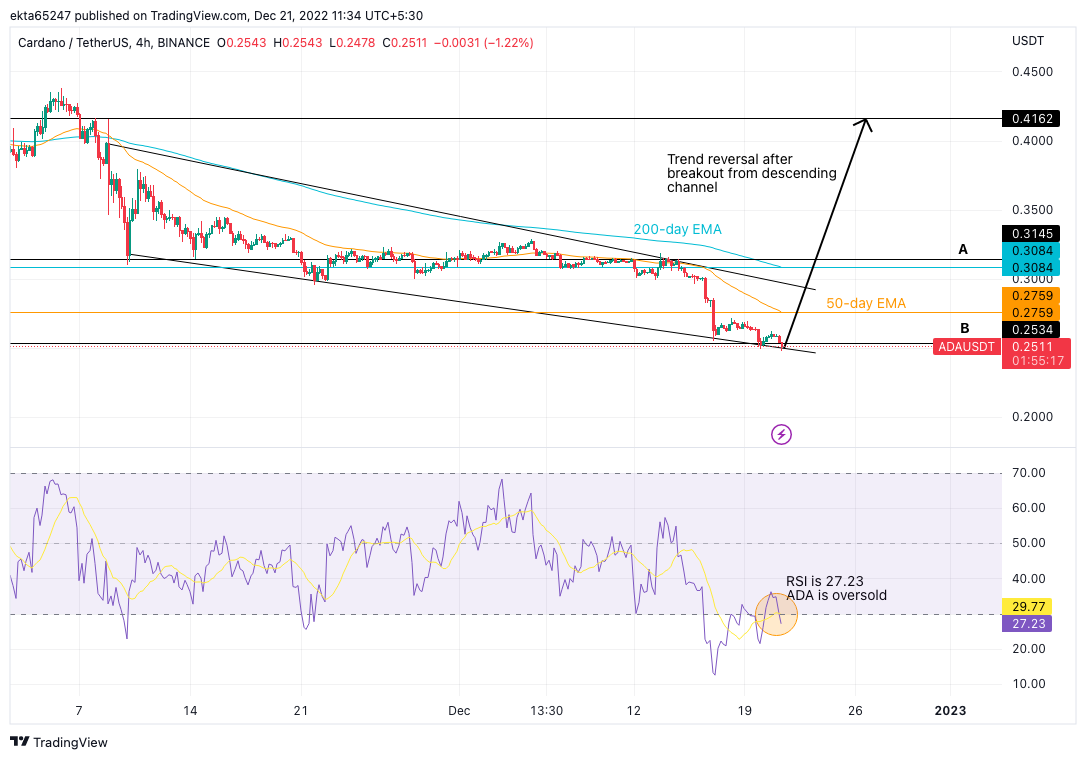 Relative Strength Index (RSI), a momentum indicator, is currently 27.23, below 30. This implies the Ethereum competitor is oversold and a reversal of the downtrend could be in the charts for the altcoin.

ADA price is trading below the two exponential moving averages, the 50-day EMA at $0.2759 and the 200-day EMA at $0.3084. These two levels could act as resistances for ADA. The target of the bullish breakout from the descending channel is $0.4162, and reaching it would wipe out losses from the collapse of the FTX exchange.

A close below the lower trendline of the descending channel could invalidate this bullish thesis for the asset and accentuate the bearish dominance.

Can Cryptocurrencies Bring About Positive Change In The World? With Big Eyes Coin and Cardarno