Data shows XRP whales have deposited around $32 million in the token to crypto exchange Coinbase, a sign that could lead to further decline in the asset’s price.

As per data from the crypto transaction tracker platform Whale Alert, two large XRP movements have been spotted during the past day. The first of these transfers involved 43,974,224 coins moving on the Ripple blockchain, worth almost $15.5 million at the time of the transaction.

Usually, such large single transaction movements suggest that the whales are involved. Transfers from this cohort are generally the ones to watch for as the sheer volume involved in them can produce noticeable impacts on the price of the coin. Below are some additional details regarding this whale transaction that may provide hints about the reason behind it. 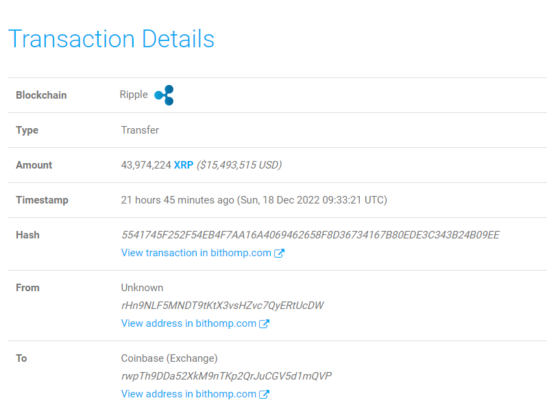 As you can see above, the sender of this transaction was an unknown address, meaning that it was unaffiliated with any known centralized platform, and likely belonged to a personal wallet. The receiving address here was a wallet attached to the crypto exchange Coinbase, suggesting that this transfer was an exchange inflow.

Since one of the main reasons why investors deposit to exchanges is for selling purposes, exchange inflows can have a bearish impact on the price. As the current inflow is from a whale, it could be a sign of dumping from this humongous holder, and could thus result in a decline in XRP’s value.

Interestingly, at the same time as this transaction, another whale transfer also took place. Here are the details about this one: 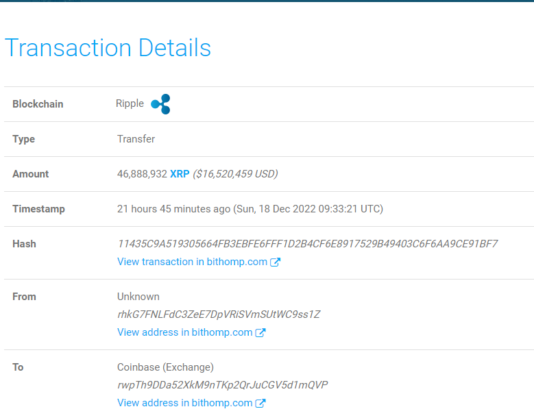 A massive amount of 46,888,932 XRP (worth around $16.5 million) moved in this transaction, and it seems like the receiving Coinbase addresses were the exact same between both transfers. The sending addresses, however, weren’t the same for the two cases.

But nonetheless, the fact that the transactions were triggered simultaneously is enough evidence that the same whale was very likely involved in both transactions. The two unknown addresses being different could likely be because the whale just kept their holdings separately in two different wallets.

If the whale indeed made this $32 million deposit to Coinbase to prepare for dumping, then it’s bad news for the XRP price, which had already been struggling in the past week, as the chart below displays. 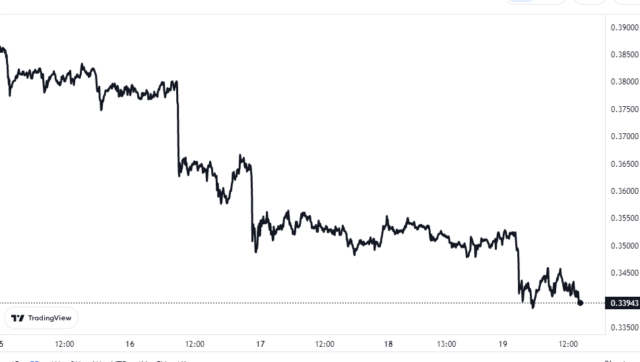 Featured image from Todd Cravens on Unsplash.com, chart from TradingView.com