Ripple’s lawsuit with SEC could be on its homestretch; where will XRP go next?

Ripple’s lawsuit with SEC could be on its homestretch; where will XRP go next?


Ripple’s [XRP] long-awaited lawsuit with SEC could be on its homestretch. Cardano’s founder, Charles Hoskinson, revealed that according to rumors, the Ripple-SEC settlement could happen by 15 December.

The confluence of these factors needs careful analysis before trading XRP. However, the price charts offer a starting point. XRP formed a descending triangle pattern and waited patiently for a breakout. A bearish breakout was likely, with $0.3444 as the new support target.

Ripple [XRP] alleged SEC settlement puts it at crossroads, but these levels can offer gains 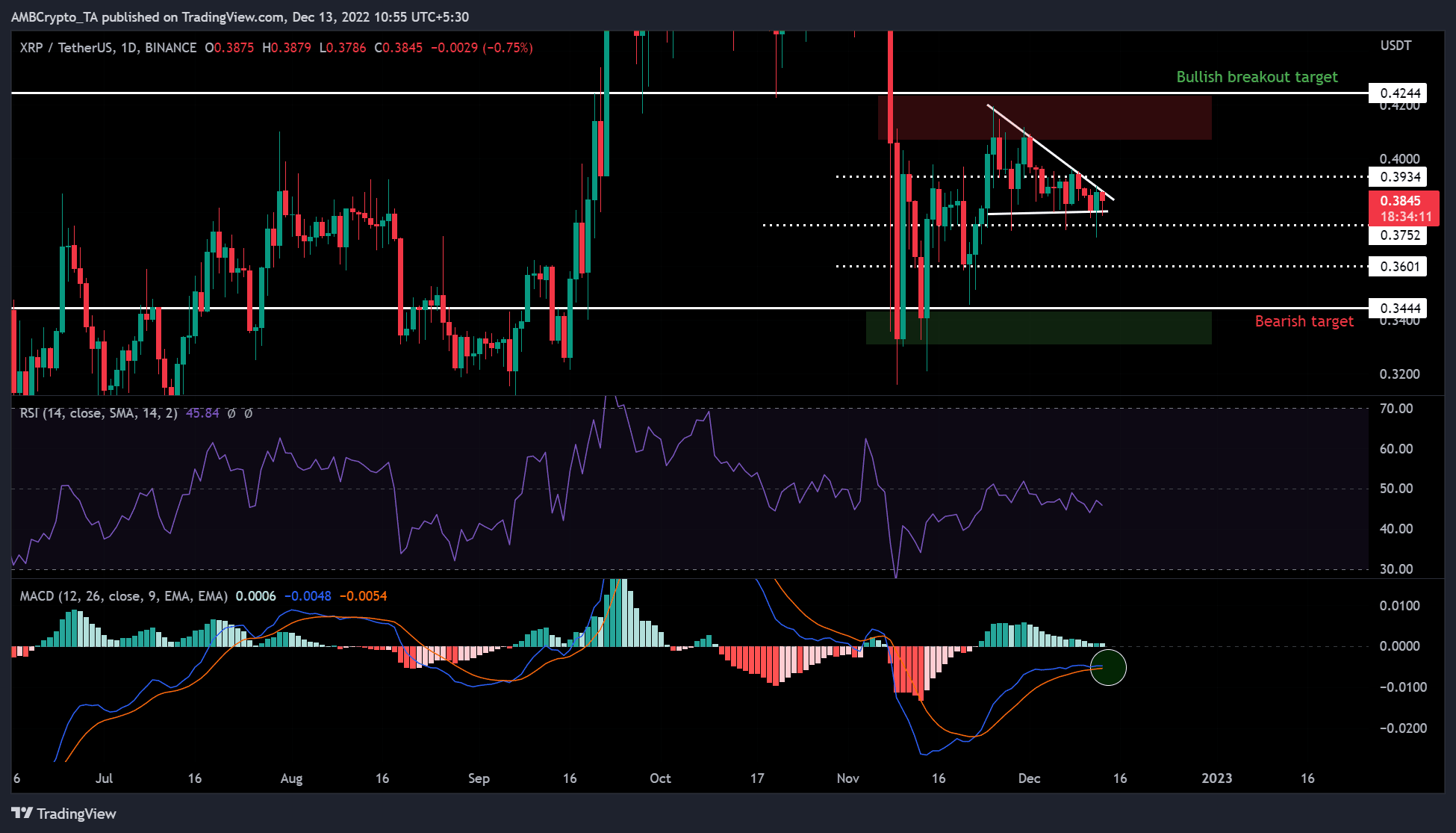 XRP could go down to $0.3444 after breaking its support levels at $0.3752 and $0.3601. The technical indicators on the daily charts suggest that a downward trend was likely.

In particular, the Relative Strength Index (RSI) slid below the neutral line. This showcased that buying pressure had fallen at press time, and selling pressure could set in.

The possibility of selling pressure taking over was further reinforced by the pending bearish MACD (Moving Average Convergence Divergence) crossover. Also known as a death cross, the bearish MACD crossover is a sell signal that could give sellers more leverage.

So, all three targets could be used to buy back XRP after selling at the current price. The choice of the short-selling target should depend on the investors’ risk tolerance.

However, a convincing patterned breakout to the upside would invalidate the above forecast. In such a case, XRP would focus on the bullish breakout target of around $0.4244.

According to Coinglass, XRP’s open interest had fallen from over $800 million in May 2022 to slightly above $200 million, at the time of publication. This translated to a 75% drop. Put differently, it meant that over $600 million moved out of XRP’s futures markets since May. This was indicative of the investors’ bearish outlook.

The outlook was not unique to Binance, as other exchanges showed a similar sentiment.

However, Santiment’s data showed a different scenario in the short term. XRP’s sentiment retreated from the negative territory and rested on the neutral line at the time of publication.

It is worth noting that the sentiment made a positive step upward but later fell to the neutral line. This showed a mixed sentiment as analysts waited for the SEC settlement and its impact on XRP’s price direction.

Thus, investors should be cautious and should monitor the aforementioned metrics and patterned breakouts for clarity.