Bitcoin and other major coins were trading in the green at press time as the global cryptocurrency market cap rose 3.1% to $1.8 trillion.

Why It Matters: Cryptocurrency markets rose alongside stock futures on Monday night as investors kept an eye on the Russia-Ukraine crisis and anticipated a U.S. rate hike.

The U.S. Federal Reserve is slated to begin a two-day meeting on Tuesday that is expected to usher in a rate hike. The central bank is expected to raise the target fed funds rate by a quarter percentage point from zero.

Russian and Ukrainian officials gave a positive assessment of their talks on Sunday, with some delegates saying draft agreements could be concluded within days, according to a Reuters report.

“Cryptos across the board are in for a choppy period as investors await developments with Russia-Ukraine talks and if the Fed gives a clear path for interest rates that could possibly lead to a deeper bond market selloff,” said Edward Moya, a senior market analyst with OANDA.

Bitcoin’s market cap dominance currently stands at 42.9%, which is an increase of 0.5% over 24 hours. At the beginning of the year, the apex coin’s dominance hovered around the 39% mark. 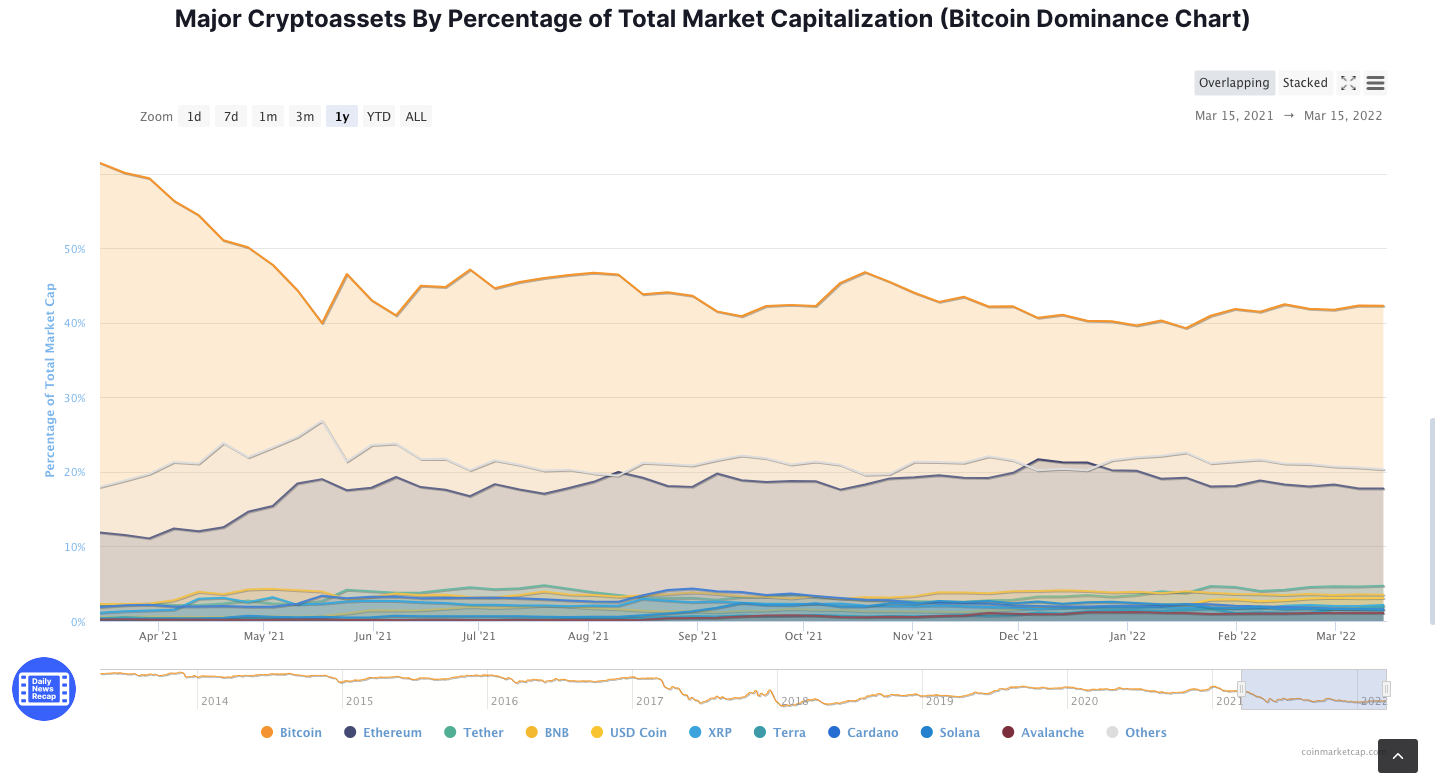 “Bitcoin has been more resilient than Ethereum to geopolitical tensions and global risk-off sentiment. BTC is down 20% since the start of the year while Ethereum has lost 32% of its value,” said Kaiko Research, in a note seen by Benzinga.

Amsterdam-based cryptocurrency trader Michaël van de Poppe tweeted that altcoins are showing “a lot of weakness” in the Bitcoin pair. He said the apex coin is consolidating.

“Not the best signs for the markets, to be honest,” said Van de Poppe.

#Altcoins are again showing a lot of weakness in the $BTC pair, as they are dropping.#Bitcoin still consolidating.

Not the best signs for the markets, to be honest.

Meanwhile, the amount of Bitcoin held on Coinbase Global Inc’s (NASDAQ:COIN) trading platform continues to fall. It has declined by 375,500 BTC or 36.6% since it touched an all-time high of 1.02 million BTC in April 2020.

Glassnode tweeted that the exodus from Coinbase was exacerbated by 31,000 BTC last week after a “large net outflow occurred.”

This was driven lower by ~31k $BTC last week after a large net outflow occurred.

We explore this further in latest edition of The Week On-chain newsletter.https://t.co/yA55i1eG0L pic.twitter.com/eu15PGDs9o

“As the largest exchange by BTC balance, and a preferred venue for US based institutions, this further supports the adoption of Bitcoin as a macro asset by larger institutions,” Glassnode said in a note.

Read Next: Elon Musk Bearish On US Dollar Right Now, Says He Still Owns Dogecoin And These 2 Cryptocurrencies And Not Selling